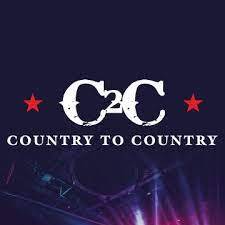 Country To Country, aka C2C, is the biggest dedicated country music festival in Europe, taking place each year in London, Dublin and Glasgow.

The festival was conceived in 2013 by two of the UK’s biggest promoters in conjunction with the Country Music Association. The first iteration took place that year at The O2 over two days, with performances from Nashville royalty including Carrie Underwood, Darius Rucker, LeAnn Rimes, Vince Gill and Tim McGraw, the latter in his first ever UK appearance.

Ensuing years grew both in duration, size and stature, as extra stages were added, hosted by BBC Radio 2 Country and Nashville’s revered Bluebird Café. The line-ups remained as star-studded as that debut outing, with some of country’s finest making the journey across the Atlantic, from The Chicks, Kacey Musgraves and Rascal Flatts to the Zac Brown Band, Reba McEntire and Dwight Yoakam.

Country To Country also earned a reputation for bringing over some of country’s most exciting rising stars, including Chris Stapleton, Margo Price and Lukas Nelson.